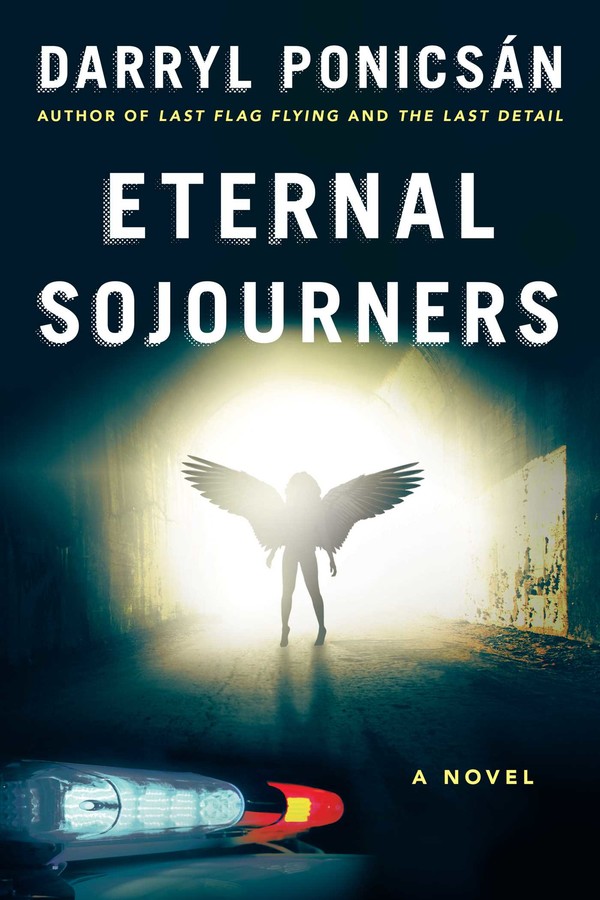 By Darryl Ponicsán
LIST PRICE £13.51
PRICE MAY VARY BY RETAILER

From the author of The Last Detail and Last Flag Flying, a surreal comic novel in the tradition of Joseph Heller about movies, small-town politics, and a place between heaven and hell.

Following a rewrite job in New York City, veteran screenwriter D. K. Kecskeméti finds himself not in his home in Hollywood Hills but in an unfamiliar house in a strange town, where he's greeted by an obsequious houseman who informs that his wife, Hope, is gone. The note she left reveals that she’s on a retreat to deal with a personal crisis of which DK was somehow unaware.

Confused and disoriented, unable to sleep, he wanders the deserted streets. He comes upon three cops, guns drawn, at the open doorway of a residence. When the doorway fills with a blinding light, they open fire. The victim falls right next to DK. She is a beautiful black woman, who happens to be naked . . . and an angel. She folds her wings as she utters her last words: “Hope is alive.”

In the days that follow, as he seeks answers about the shooting and a way to rejoin his wife, DK learns more about his new hometown and meets its residents, who try to convince him—through the roar of leaf blowers—that he's lucky to be in this little slice of heaven. But what can a screenwriter do when "a little slice of heaven" is closer to a small corner of hell?

Darryl Ponicsán is the author of thirteen novels and is an award-winning screenwriter for both film and television. Born in Shenandoah, Pennsylvania, he taught high school after attending Muhlenberg College and earning an MA at Cornell University. He served in the US Navy from 1962 to 1965, then did social work in the Watts area of Los Angeles and taught high school before the success of his debut novel, The Last Detail, allowed him to become a full-time writer. He resides in Palm Springs and Sonoma, California.

“A parable for our times, full of absurdist humor."—Joseph Wambaugh

“Darryl Ponicsán explores the deepest mysteries of all with this engrossing novel, an often funny, sometimes sad, but always magical investigation of culture, art, and, most of all, life. Ponicsan has somehow turned his observations into a what-happens-next page turner.”—Michael Connelly, author of The Night Fire

“A metaphysical mystery tour twisting through cultural time zones and exploring the depths of the heart with surprising revelation, uniquely textured by balanced wit and hard-earned wisdom.”—Thomas Sanchez, author of Mile Zero and Rabbit Boss

"This is small town satire at its best. An oblivious wealthy newcomer gets trapped into a battle over the sound of leaf blowers unaware that the real battle is over his soul. A fast-paced, funny, and satisfying read where no one gets off easily.”—Ada Limón, author of The Carrying, winner of the National Book Critics Circle Award

“The author of Last Flag Flying puts the hero of his latest novel in an odd predicament. . . . Literature lovers will appreciate the references to Mary Shelley and her circle, the original eternal sojourners.”—Booklist

Praise for Last Flag Flying:
“Darryl has once again captured the camaraderie and complexity of male bonding, as he did so brilliantly in The Last Detail. Three familiar characters, now some thirty years later, with a dubious history and an undesirable task ahead of them are what dominate the fascinating and satisfying story in Last Flag Flying.”—Bryan Cranston

"Ponicsán delivers an irreverent, acerbic, but nonetheless poignant look at the true nature of loyalty. Recommend both novels and the movie."—Booklist

Praise for The Last Detail:
“Remarkably good… The writing is superb, the pace headlong, the irony tempered with a curious gentleness.”—Cosmopolitan

“One of the ten best novels of the year.”–Philadelphia Inquirer

“One of the really excellent novels we will draw this year, and Ponicsán… proves himself not only a master but a model of dialogue.”–San Francisco Sunday Examiner and Chronicle

“[A] gem of a first novel… fast-paced… [The] dialogue often is hilarious..”–Fort Worth Star

“An accomplished writer with a sure storyteller’s touch.”–St. Louis Post Dispatch

“Will make any serviceman say: ‘Sure, that’s the way it was.’”–Newsday

By Darryl Ponicsán
LIST PRICE £13.51
PRICE MAY VARY BY RETAILER