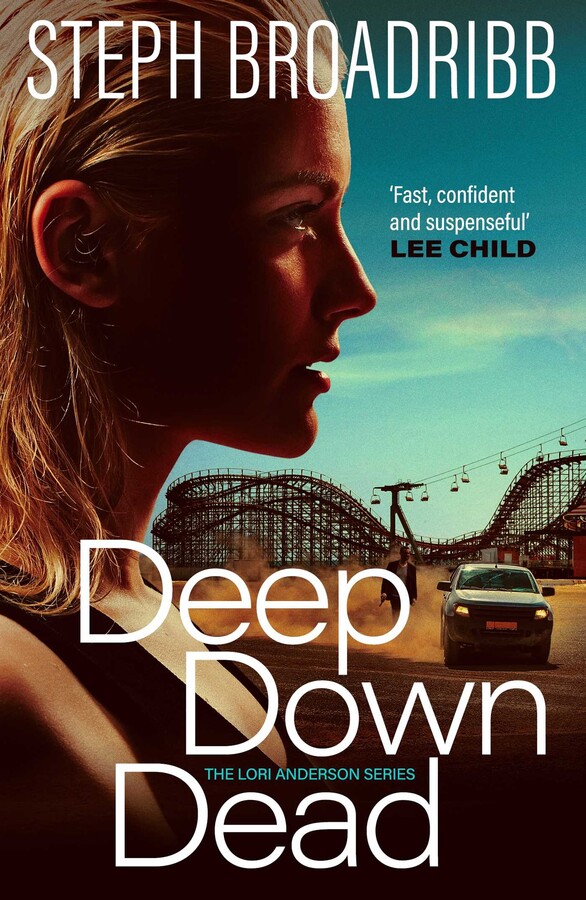 Shortlisted for:
**The Kathy Reichs Award for Fearless Female Character**
**The Cat Amongst the Pigeons Award for Most Exceptional Debut**
**FINALIST IN THE INTERNATIONAL THRILLER WRITERS AWARDS FOR BEST FIRST NOVEL**

Part-time Florida bounty-hunter Lori Anderson isn’t a superhero … she’s a single mum with a lot on her plate. But when her family is threatened, she’ll stop at nothing to seek justice, and keep them safe…

‘My kind of book’ Lee Child

Six states. Three days. One chance to save her child…
Lori Anderson is as tough as they come, managing to keep her career as a fearless Florida bounty hunter separate from her role as single mother to nine-year-old Dakota, who suffers from leukaemia. But when the hospital bills start to rack up, she has no choice but to take her daughter along on a job that will make her a fast buck. And that’s when things start to go wrong.

The fugitive she’s assigned to haul back to court is none other than JT, Lori’s former mentor – the man who taught her everything she knows … the man who also knows the secrets of her murky past. Not only is JT fighting a child exploitation racket operating out of one of Florida’s biggest amusement parks, Winter Wonderland, a place where ‘bad things never happen’, but he’s also mixed up with the powerful Miami Mob. With two fearsome foes on their tails, just three days to get JT back to Florida, and her daughter to protect, Lori has her work cut out for her. When they’re ambushed at a gas station, the stakes go from high to stratospheric, and things become personal.

Breathtakingly fast-paced, both hard-boiled and heart-breaking, Deep Down Dead is a simply stunning debut from one of the most exciting new voices in crime fiction.

Praise for the Lori Anderson Series

‘If you like your action to race away at full tilt, then this whirlwind of a thriller is a must’ Sunday People

‘An impressive thriller, the kind of book that comfortably sits alongside seasoned pros at the top of their game. Sultry and suspenseful, it marks a welcome first vow for an exceptional new voice’ Good Reading Magazine

‘Suspense, action, romance, danger and a plot that will keep you reading into the wee small hours. I loved it’ Lisa Gray, Daily Record

‘Readers will cheer her every step of the way’ Publishers Weekly

‘A hell of a thriller’ Mason Cross

‘A stunning debut from a major new talent’ Zoë Sharp

‘One of my favourite debut novels for a long, long time’ Luca Veste

‘The pace moves at breakneck speed. The writing style is accomplished and real and this is quite simply one of the best debut novels I have ever read’ Angela Marsons

Steph Broadribb was born in Birmingham and grew up in Buckinghamshire. Most of her working life has been spent between the UK and USA. As her alter ego – Crime Thriller Girl – she indulges her love of all things crime fiction by blogging at crimethrillergirl.com, where she interviews authors and reviews the latest releases. Steph is an alumni of the MA in Creative Writing (Crime Fiction) at City University London, and she trained as a bounty hunter in California. She lives in Buckinghamshire surrounded by horses, cows and chickens. Her debut thriller, Deep Down Dead, was shortlisted for the Dead Good Reader Awards in two categories, and hit number one on the UK and AU kindle charts.
My Little Eye, her first novel under her pseudonym Stephanie Marland was published by Trapeze Books in April 2018.
Follow Steph on Twitter @CrimeThrillGirl and on Facebook facebook.com/CrimeThrillerGirl or visit her website: crimerthrillergirl.com

‘This is romping entertainment that moves faster than a bullet’