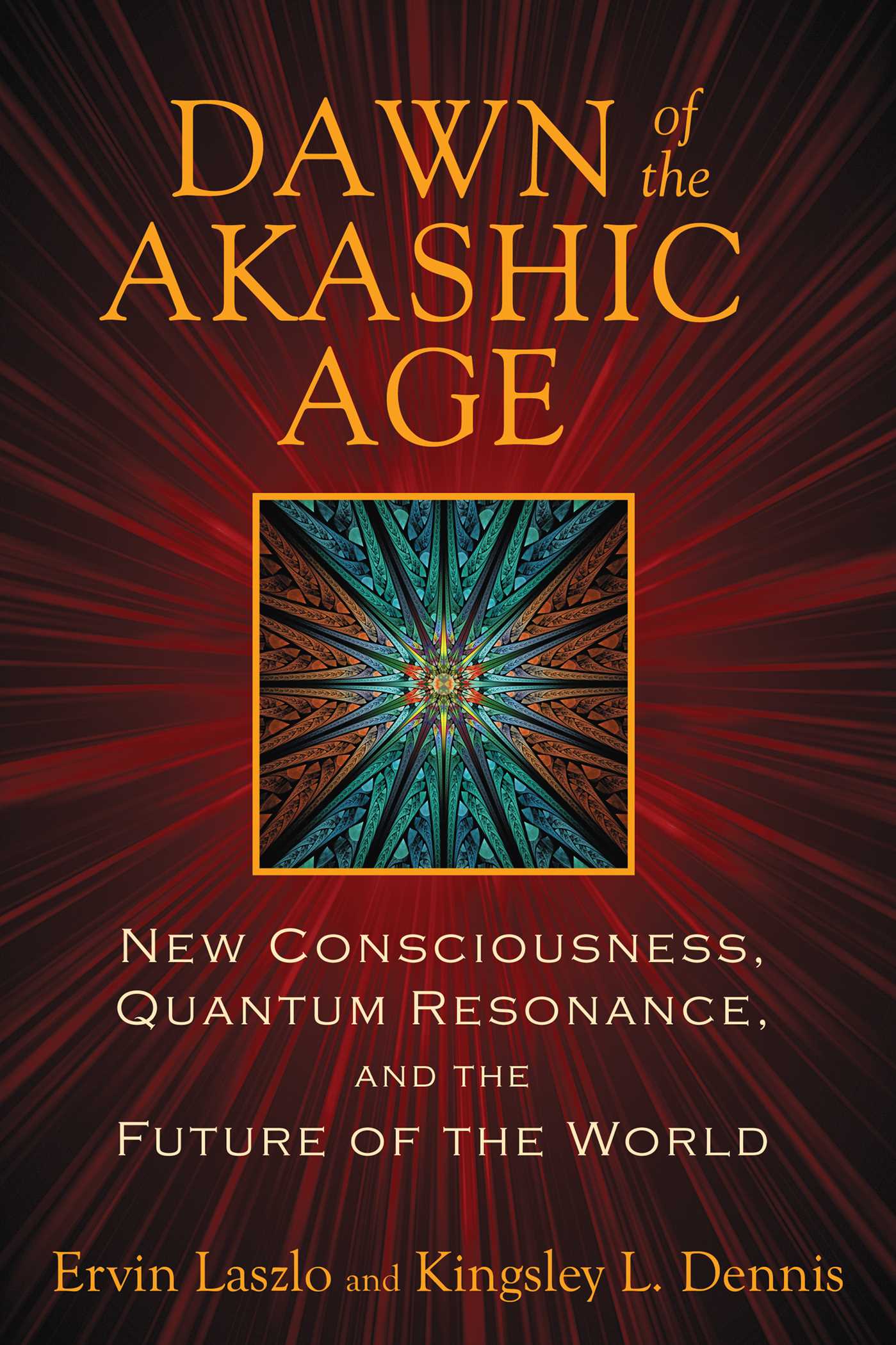 Dawn of the Akashic Age

New Consciousness, Quantum Resonance, and the Future of the World

A preview of the post-mechanistic, holistic world in 2020 and 2030 as well as a map of the obstacles we must overcome to get there

• Reveals how the youngest generation is seeding the shift in consciousness

The world is changing. The transition from the mechanistic worldview to one that recognizes the interconnectedness of all life is upon us. It is the dawning of the Akashic Age. The Akashic field that connects the universe is now recognized by cutting-edge science. What we know about communication, energy, and consciousness is rapidly evolving in tandem with the new quantum worldview. Many adults are consciously evolving to meet the transitional challenges at hand, while today’s youth have arrived already hard-wired with the new consciousness. Rising from the ashes of the old systems, this Phoenix generation of radical change agents is seeding our evolution and spiritual transformation, a process that will continue over the next few decades.

Authors Ervin Laszlo and Kingsley Dennis look at the chief engine of the coming changes--the growing global understanding of nonlocality--and the development of practical applications for it. They examine how the new values and new consciousness taking hold will reorganize society from top-down hierarchies into grassroots networks like those revealed through quantum physics’ understanding of energy and information waves and experienced daily by millions through social media.

With contributions from visionary thinkers such as futurist John L. Petersen, ex-CEO of Sanyo Tomoya Nonaka, media activist Duane Elgin, systems scientist Alexander Laszlo, and spiritual economist Charles Eisenstein, this book explores the future of education, spirituality, the media, economics, food, and planetary citizenship as well as the expansion of consciousness necessary to reach that future.

Chapter 6
DAWN OF THE AKASHIC AGE

SHARING OUR CONNECTIONS
A new form of participatory consciousness has been emerging through our increased interconnectivity and global intercommunication. This is a distributed model that connects people horizontally in a more egalitarian way rather than through top-down structures. It catalyzes people into becoming more active through their participation. No longer do we have to remain the passive audience, as during the earlier communication revolutions of radio and television. The new model already with us is blogging, mobile phone text messaging, social networking, and engaging in similar forms of distributed social media. The dialogue is now shifting into a more active domain where people are putting themselves onstage and orchestrating their own connections, presence, and self-expression. At the dawn of the Akashic Age the civil body of the planet will really begin to grow and stretch its tentacles.

Social networks--both physical and virtual--have matured tremendously over recent years, with the list of global Non-Governmental Organizations (NGOs) growing longer, and stronger, with each passing year. These innovative networks are the forums for visionary thinkers, where new ideas and concepts can spread virally through the communications-based nervous system of the planet.

The new civil body joining the distributed contributions of individuals worldwide is set to become a major feature of an integrated planetary society. With talks being broadcast regularly online and through access to an array of innovative lectures and social forums, people can be actively influenced and alternative thinking and ideas can be stimulated. A more mature form of collective social intelligence can begin to emerge in various parts of the globe. Indeed, we envision that civil society, which is the largest movement in history, will grow to become more dominant and influential in transforming our societies. To belong to this diverse and yet unified family is not only a responsibility, it is also a blessing.

Externally we may seem to be a vast, distant, and separated collection of people, yet reality is just the opposite. The reality is that we form a dense, intimate, closely entwined species of various races, sharing a nonlocal sense of being. Younger generations of people worldwide are growing up with a new expression of consciousness. Younger people are increasingly more comfortable in expressing themselves with strangers, and many of them explore and express their inner thoughts, feelings, emotions, and ideas with hundreds of unknown persons online, from various cultural backgrounds. More and more daily interactions are empathic as people share news, stories, and emotional impacts from sources around the world.

Empathy is becoming one of the core values by which we create and sustain social life. Exposure to impacts outside of our own narrow environment will help us to achieve tolerance. We are living with experiences that are richer and more complex, full of ambiguities, multiple realities, and shared perceptions.

Trillions of online friendships have already been formed, and this trend is likely to increase. Every day online social networks create thousands of friendships even across conflicting religions and regions. The online worlds of social networking are often fueled by genuine empathy and a spirit of sharing. Around the world an hour of video is now uploaded every second; we are collectively generating more content than ever before in the history of civilization. The years ahead can foster these social networks into principal channels of communication whereby individuals can gain almost instant access to news occurring in other areas around the world, bypassing traditional modes of mainstream media news.

On August 4, 2010, Google CEO Eric Schmidt said that every two days we are now creating as much information “as we did from the dawn of civilization up until 2003” and that by 2013 that quantity of information will be created every ten minutes. Most of this is usergenerated content, material that people have created themselves and contributed to the world. It is estimated that more than 68 million users share content every day. As an example of the figures involved, more video is uploaded to YouTube every six months than was produced by the three major U.S. TV networks in the past 60 years.

What is emerging is an incredible global platform for sharing, in large part free of commercial goals. All of this makes for a stupendous platform for connecting ideas and content, with very little personal investment in skills and finance. This collaborative and participatory world of online content could become a global commons that reinforces a sense of local identity while connecting people in all parts of the globe. This outreach of connectivity has the power and the potential to break down old perceptual paradigms of duality--the “us” and “them”--that have been exploited by governments and ruling authorities to serve their own goals of control and conquest.

The younger generations are accustomed to sending and receiveing information in a way that could nourish local networks rather than replace them. This can stimulate increasing numbers of young people from many nations to become involved in community and social projects and with NGOs--for example, by taking a year out to help in another culture abroad, to learn and experience, and to offer assistance. The model that the Internet and other distributed communications represent is a bottom-up, horizontal medium for spreading awareness, information, and contact. It is horizontal in that it bypasses the old model of top-down, hierarchical control structures that have been so strongly in place in recent history. If it is to truly become an effective new model for the Akashic Age, this horizontal model of distributed connectivity needs to grow and develop beyond the virtual world into the physical world. It must be able to transform how we do things daily in our communities and immediate environments. The applications of the model need to cross-fertilize so that our technologies of global connectivity can enhance and enrich our lives, friendships, and connections.
Ervin Laszlo

Ervin Laszlo is a philosopher and systems scientist. Twice nominated for the Nobel Peace Prize, he has published more than 75 books and over 400 articles and research papers. The subject of the one-hour PBS special Life of a Modern-Day Genius, Laszlo is the founder and president of the international think tank the Club of Budapest and of the prestigious Laszlo Institute of New Paradigm Research. The winner of the 2017 Luxembourg Peace Prize, he lives in Tuscany. In 2019, Ervin Laszlo was cited as one of the "100 Most Spiritually Influential Living People in the World" according to Watkins Mind Body Spirit magazine.

Kingsley L. Dennis, Ph.D., is a sociologist, writer, and a cofounder of WorldShift International. The author of numerous articles on complexity theory, technologies, new media communications, and consciousness, he spends his time between Andalusia, Spain, and the United Kingdom.

“Dawn of the Akashic Age is full of riveting ideas about the great evolutionary leap now facing humanity, but that is not what distinguishes this book. It is the masterful orchestration of leading-edge thinking into full symphonic resonance that sets it apart as a classic. It defines a new pinnacle of coherence in mapping our utter transformation as an evolved planetary species.”

“In this remarkable book Laszlo and Dennis have done nothing less than draw the blueprint for a planetary society. The Akashic Age is the logical successor to both the Industrial Revolution and the Information Era, because it is based on a paradigm of connectedness not separation, of sustainability not exploitation, and of transformation not inertia. It serves as a healthy antidote to the doom and gloom found in most other books about humankind’s future and warns that a positive transition and a better world will require deliberate effort, conscious deliberation, and hard work. Given the alternatives, readers of Dawn of the Akashic Age may decide that the required love and labor will be worth it.”

– Stanley Krippner, Ph.D., professor of psychology at Saybrook University and coauthor of The Voice of

“In this book the writers go beyond this connected consciousness to the connection of all people in the world in their values, beliefs and actions. The dawn of this akashic age is seen all around us, in the Occupy Movement and locally in our sustainability, farmers markets and cooperative actions. To bring this new world to fruition we each need to be involved and play our diverse parts. Laszlo and Dennis’s vision provides us with great hope and direction.”

“Let it be said that a book has now been written about our future, a book that we ignore at our peril. This inspiring book is the alarm clock that can stir us from our slumber.”

– Larry Dossey, M.D., author of One Mind and Healing Words and former executive editor of Alternative

Dawn of the Akashic Age

New Consciousness, Quantum Resonance, and the Future of the World