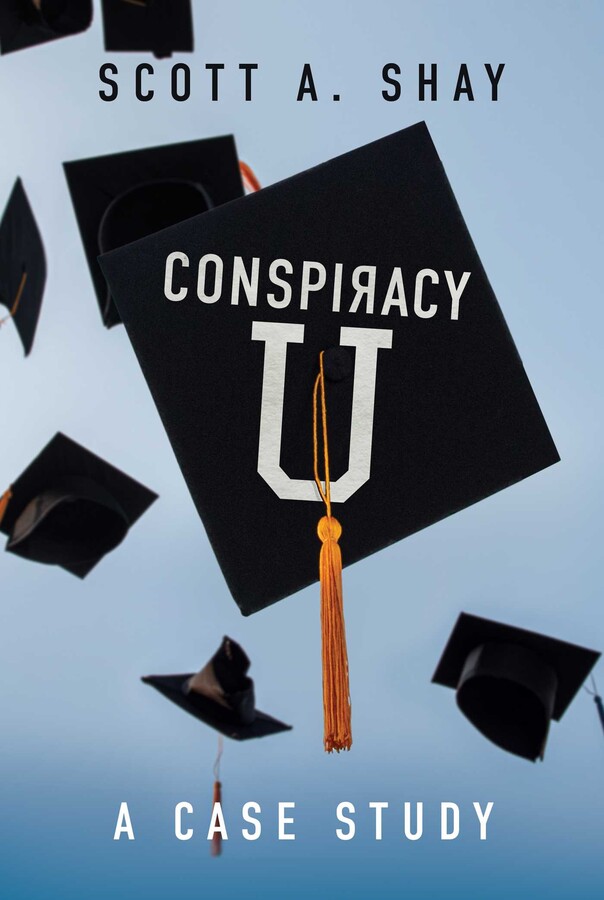 By Scott A. Shay
Published by Wicked Son
Distributed by Simon & Schuster
LIST PRICE £20.00
PRICE MAY VARY BY RETAILER

Conspiracy U exposes how conspiracy theories drawn from far-right and far-left ideologies masquerade as scholarship at many universities, endangering our norms and conceptions of morality and truth.

In Conspiracy U, Shay presents a case study of his alma mater, Northwestern University, in order to challenge the proliferation of anti-Zionist conspiracy theories championed on college campuses by both the far right and far left.

Shay tackles the thorny question of how otherwise brilliant minds willingly come to embrace and espouse such patent falsehoods. He explains why Zionism, the movement for Jewish national self-determination, has become the focal point for both far-right and far-left conspiracy theories. His keen analysis reveals why Jews serve as the canary in the coal mine.

Conspiracy U delivers an urgent wake-up call for everyone who cares about the future of civil society and is concerned that universities today are failing at teaching students how to strive for truth but rather guiding students to blindly trust theories driven by ideology. The book provides a roadmap for reform based on universal moral and intellectual standards and offers a way out of the culture wars that are ripping America apart.

Scott A. Shay is the author of In Good Faith: Questioning Religion and Atheism (a Mosaic Authors’ Best Book of 2018 and a finalist for a National Jewish Book Award) and Getting our Groove Back: How to Energize American Jewry. He is a co-founder and chairman of Signature Bank. His essays have appeared in the Wall Street Journal, the New York Daily News, Bloomberg, The Hill, Jewish Week, American Banker, Forward, and many other publications. Shay has been thinking about universities ever since he became the first person on either side of his family to attend one.

"Scott Shay has written a courageous and compelling critique of the ways that anti-Semitic conspiracy theories have taken root in parts of academia. While focusing on Northwestern University—the beloved alma mater of us both—he could just as well have written about any major American campus. The liberal spirit, indispensable to the modern Jewish success story, is under sustained assault from right and left. This book is a powerful guide to helping us push back." —Yossi Klein Halevi, Senior Fellow, Shalom Hartman Institute, Author of Letters to My Palestinian Neighbor

"This book is a wake-up call to all of us, whether we are Jewish or not. The author methodically lays out the threat of Conspiracy Theories. We should all learn the lessons from this book. In today's world, too much distortion of facts has been done, with Conspiracy Theories as the weapon of choice. Hopefully the Golden Rule of 'Do unto others as you would have them do unto you' will be the shining light and overcome the darkness." —Fred Teng, President, America China Public Affairs Institute

"Conspiracy U is at once moving and maddening while inviting thinking and motivating action. Shay carefully dissects the anti-Zionist antisemitism of the far left and far right, finding frightening points of convergence and demonstrating that much of anti-Israelism is just plain anti-Semitism. This is a must-read not just for those interested in Israel but for anyone trying to understand the broad cross currents that are buffeting society."  —Mark Mellman, President and CEO, Democratic Majority for Israel

"Scott Shay has written an engaging personal account of Jewish history, connecting his and his father's experiences into a larger narrative which starts millennia ago. This book should be required reading for any high school or college student interested in Jewish heritage who is looking for insight into how the Jewish journey relates to some of the most hot button issues of today." —Simone Friedman, Head of Philanthropy and Impact Investment, EJF Philanthropies

"Scott Shay has once again written a well-researched and compelling book on a scourge of our time: the conspiracy theory. He defines what such theories are, demonstrates their ugly reach, and describes their stubborn persistence in his own search for an abiding truth." —Dr. Erica Brown, Director of the Mayberg Center for Jewish Education and Leadership, The George Washington University

"This book is a wake-up call to anyone, in the US or the UK, who cares about the state of higher education. The book is painstakingly researched and documents anti-Semitic conspiracy theories from both the far right and the far left. It's not an easy read, but is sadly an important one. Shay has written a tough love letter to Northwestern University and to all academia." —Rabbi Shoshana Boyd Gelfand, London, UK

"The education of the next generation is vital in the fight against anti-Semitism, for history teaches us that the Jewish people have always been the 'canary in the coal mine,' whose mistreatment inevitably indicates broader societal danger coming to other minorities. Scott Shay takes a courageous look at what is being taught in our universities today and its dangerous consequences. Shay brilliantly explains what we can do to change the narrative now."  —Bishop Robert Stearns, Executive Director, Eagles’ Wings

"Though the assault on truth and the proliferation of conspiracy theories are not new in the long course of history, the unique issues on today's college campuses require thoughtful analysis. Scott Shay's new book Conspiracy U provides that and more, offering prescriptions for tackling this challenge that speaks to who we are as a people and who we will be as today's students become tomorrow's leaders." —Rabbi Rick Jacobs, President, Union for Reform Judaism

"This is a thoughtful book which I recommend, while noting my disagreement with some of its conclusions. Scott Shay presents extensive evidence of increasing anti-Semitic attacks in America. While I believe that the overall situation is less ominous that he does—I strongly differ from his discussion of Jews and 'whiteness'—those committed to combating prejudice in America will benefit from understanding why he, as a Jew who has worked hard to promote mutual respect among all sectors of our society, has come to feel as he does." —Former Congressman Barney Frank, D-MA

"Conspiracy U is an urgent book that appears just in time. Full of facts and history, the book argues unironically that, without facts and history, a theory quickly becomes a conspiracy theory—and that conspiracy theories about the Jews have devastating consequences, not just for the Jews. Shay's argument is unimpeachable, and readers will be armed with a complex understanding of Jewish history and Zionism, conspiracy theories and their political positioning, and the illiberal and dangerous trajectory of the American academy. This is a fight that liberals and progressives must take on ourselves and Conspiracy U will be instructive for all of us." —Amanda Berman, Founder and Executive Director of the Zioness Movement

"Scott Shay has written a book that is compelling and telling. Shay is a much-needed referee calling fouls on professors who aren't playing by the rules." —Walt "Clyde" Frazier, NBA Legend and Basketball Hall of Fame Member

By Scott A. Shay
Published by Wicked Son
Distributed by Simon & Schuster
LIST PRICE £20.00
PRICE MAY VARY BY RETAILER