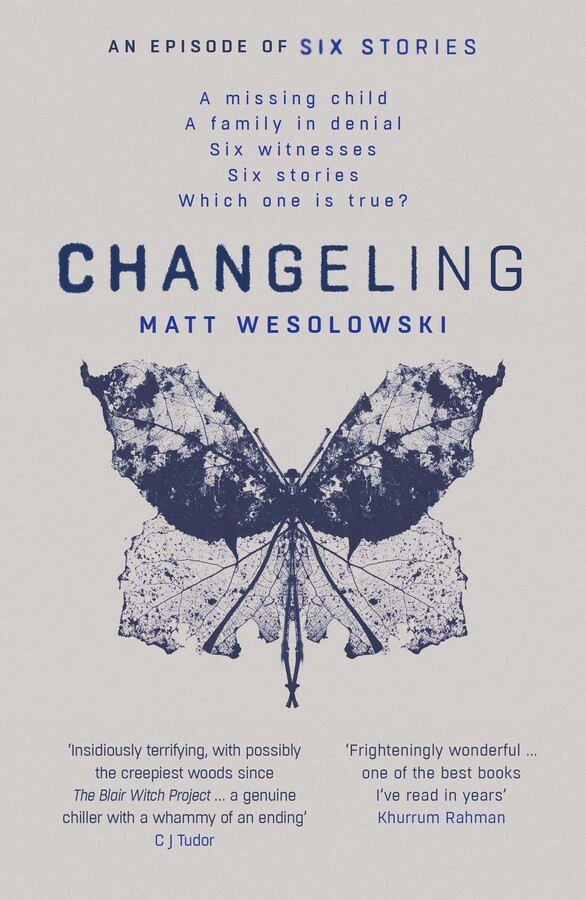 LONGLISTED for the Theakston Old Peculier Crime Novel of the Year

SHORTLISTED for Best Thriller at the Amazon Publishing Readers’ Awards 2019

‘Insidiously terrifying, with possibly the creepiest woods since The Blair Witch Project … a genuine chiller with a whammy of an ending’ C J Tudor

A missing child
A family in denial
Six witnesses
Six stories
Which one is true?

On Christmas Eve in 1988, seven-year-old Alfie Marsden vanished in the dark Wentshire Forest Pass, when his father, Sorrel, stopped the car to investigate a mysterious knocking sound. No trace of the child, nor his remains, have ever been found. Alfie Marsden was declared officially dead in 1995.

Elusive online journalist, Scott King, whose ‘Six Stories’ podcasts have become an internet sensation, investigates the disappearance, interviewing six witnesses, including Sorrel and his ex-partner, to try to find out what really happened that fateful night. Journeying through the trees of the Wentshire Forest – a place synonymous with strange sightings, and tales of hidden folk who dwell there, he talks to a company that tried and failed to build a development in the forest, and a psychic who claims to know what happened to the little boy…

Intensely dark, deeply chilling and searingly thought provoking, Changeling is an up-to-the-minute, startling thriller, taking you to places you will never, ever forget.
_________________

‘A complex and subtle mystery, unfolding like dark origami to reveal the black heart inside’ Michael Marshall Smith

‘Haunting, horrifying, and heartrending. Fans of Arthur Machen, whose unsettling tale The White People provides an epigraph, will want to check this one out’ Publishers Weekly

Matt Wesolowski is an author from Newcastle-Upon-Tyne in the UK. He is an English tutor for young people in care. Matt started his writing career in horror, and his short horror fiction has been published in numerous UK- an US-based anthologies such as Midnight Movie Creature, Selfies from the End of the World, Cold Iron and many more. His novella, The Black Land, a horror set on the Northumberland coast, was published in 2013. Matt was a winner of the Pitch Perfect competition at Bloody Scotland Crime Writing Festival in 2015. His debut thriller, Six Stories, was an Amazon bestseller in the USA, Canada, the UK and Australia, and a WHSmith Fresh Talent pick, and film rights were sold to a major Hollywood studio. Hydra, was published in 2018 and became an international bestseller.
Follow Matt on Twitter @ConcreteKraken and on his website: mjwesolowskiauthor.wordpress.com