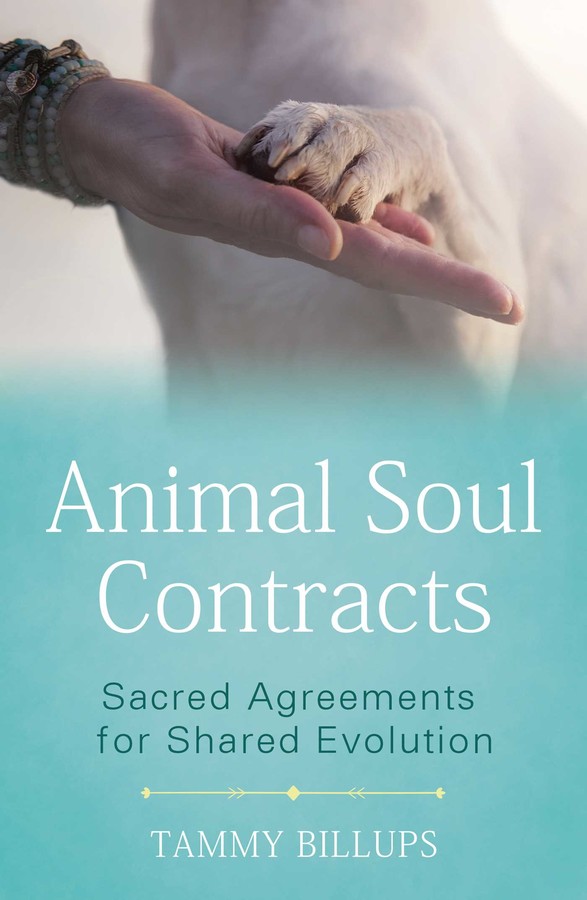 Animal lovers are extraordinary. Despite awareness that we will probably outlive our beloved pets, we are still drawn, time and time again, to the connection, joy, and unconditional love that come with sharing our lives, homes, and laps with animals. Many of us feel something deeper than just companionship with our animal friends--a heart-to-heart connection felt all the way to the soul level.

Revealing the higher purpose and soul mission behind our relationships with our animal companions, Tammy Billups explores the spiritual contracts that are created when a human bonds with an animal and shows how we come into each other’s lives for a reason. Providing real-life examples, Billups explains why animals choose, at the soul level, to have certain perceived negative experiences, such as physical or behavioral issues, to evolve their souls, clear karma, and help our soul’s evolution. She shows that human and animal souls orchestrate every experience and interaction that holds potential for transformation and healing, including the final transition. She demonstrates the inner dynamics of the animal-human relationship to help animal lovers understand their soul contracts with their pets. The inspirational, real-life examples of animal-human tandem healings that Billups facilitated identify the soul contracts within each pairing that transformed feelings of grief, loss, abandonment, betrayal, trauma, abuse, and anxiety.

The author reveals how animals we have previously loved and shared our lives with come back, either on the spirit level or reincarnated in a new animal form, to support us. Offering peace and hope to those who’ve lost beloved animal companions, she describes what she’s witnessed during healing sessions with animals in the weeks before they transition and during their passing. Billups also includes practical instructions for identifying different types of animal soul contracts and connecting with and enlisting the help of your light team or spirit guides.

By discovering the soul agreements that underlie our animal partnerships, we can find meaning in the issues that arise with our animals and ourselves, support our souls’ mutual evolution, and allow the soul contracts to weave their spiritual magic in the animal-human relationship.

A Soul Contract is an agreement between two beings to progress their growth in this lifetime. Before your animals incarnated to be with you, your Higher Selves agreed upon the lessons and growth needed for your mutual healing and development. For the ease of this material, I interchangeably use the words agreement and contract.

Through my work the last two decades, I’ve identified and documented seven levels of soul agreements. Indeed, there are seven different conceptual approaches that animals and humans use to engage in intentional soul communication for their mutual growth. Held within each level are distinctive ways that you are helping each other to live out your pre-planned agreements. Agreements can be with any animal that has touched you in small and large ways. This can include the animals that you live with but will also be animals that have briefly been in your life, in addition to animals in nature.

The closer you emotionally become to your animals, the more engaged they are in your soul growth. And in turn, you will both agree to contracts for your mutual growth. If you are an introvert or empath, it is more likely that your soul has turned to animals to collaborate with for your personal transformation.

As you read through the following contract levels, notice which agreements you can relate to with your current or past animal companion(s). There are usually many levels of agreements operating within each of your animal collaborations. Every agreement, at its core, is rooted in unconditional love for the other being, and agreed upon in advance by both beings in the relationship. When there are multiple people in the house in relationship with the animal, each pairing has their own personalized agreements. That’s why two people will describe or see different traits in the same animal and respond differently to their behaviors.

The contracts are designed to assist both the animal and their human to heal and enrich their soul development on the path to feel more love and less suffering.

Have you ever had an animal companion that just “happened” to have the same physical issue as you do? Bad hip? Diabetes? Allergies? This is more common than you might think. As a young adult in my twenties and thirties, my animals frequently manifested my same exact physical issues. Before I embarked on an inner healing journey, I had a plethora of physical ailments, and my cats were always ill… with my stuff. When my cat Vasi developed asthma a month after my diagnosis I was astounded. And it was no coincidence.

Animals can and will mirror or carry their person’s physical issues. Typically, it’s rooted in energy transference originating from a deep love and desire to serve the other being by taking away their pain. However, the animal’s soul also has past and current life experiences that will manifest similar issues as their person, due to the undeniable force of likes attracts likes. Like beings are magnetized towards each other and this level of agreements frequently unfolds within very bonded animal-human pairings.

It’s a beautiful unfolding of events when someone realizes that their animals’ physical ailment is a divinely orchestrated message just for them. And I’ve witnessed the magic of an animal’s miraculous healing that sometimes arrives soon after the person begins working on healing their emotional wound behind a physical manifestation.

These soul agreements are active within almost every animal-human relationship, and upon their recognition have the ability to make life-changing positive differences with animals and their humans. The mirrors of truth in these agreements are undeniable.

Early into my work with animals I was astonished to discover that animals hold the same energetic wound patterns of protection as the humans in their life. There are literally energetic patterns of protection that people, and animals, unconsciously create to keep an unhealed emotional wound concealed until the psyche has grown and healed enough to release it.

The emotional wounding that sets up shop in the body needs to be cleared before the physical level can permanently heal. And, the original emotional wound can go back to early childhood, the womb, and most probably a past life. At the time the emotional wounds or traumas are initiated, the psyche brilliantly represses and protects them until the person, or animal, has emotionally matured enough to endure the release.

The five core emotional wounds are: abandonment, betrayal, invasiveness, terror, and denial of self. Almost every manner of negative behavior from your animal originates from an unhealed emotional wound within themselves or within you. As a result, your animal might be exhibiting behaviors like aggression, overprotecting their person or the house or yard, over licking, overeating, over-barking and inappropriate elimination.

People and animals will mirror the same emotional wounds and energetic patterns of protection. Within this level of contract, there is an agreed upon team effort to heal these wounds together through their strong reflection. When people begin to actively heal their emotional wounds, the animal mirroring their emotional wounds will similarly benefit and it will help them to automatically heal with the shift of energy in their person.

If the animal lover is unaware of this agreement dynamic, typically their focus is solely on helping the animal heal their physical and behavioral issues. When a person realizes their animal is mirroring their unhealed emotional wound, it can bring much light to the center of their shared wounds. Many times, I’ve seen people proactively begin a deep inner healing journey, only to find that their animals have raised their vibration too and mirror their humans’ new level of wellness. Animals will then exhibit fewer physical issues and/or negative behaviors.

Embarking on an inner healing journey is actually a form of self-love and will help the animals too. Mutual healing is the ultimate goal for Emotional Wound Agreements.

Tammy Billups is a transformational soul healer and pioneer on the animal-human sacred soul partnership. She’s a sought after holistic healer, the creator of animal-human Tandem Healings, and a Certified Interface Therapist. She has appeared on CNN’s The Daily Share, Primetime Live ABC, and Oprah. She lives near Atlanta, Georgia.