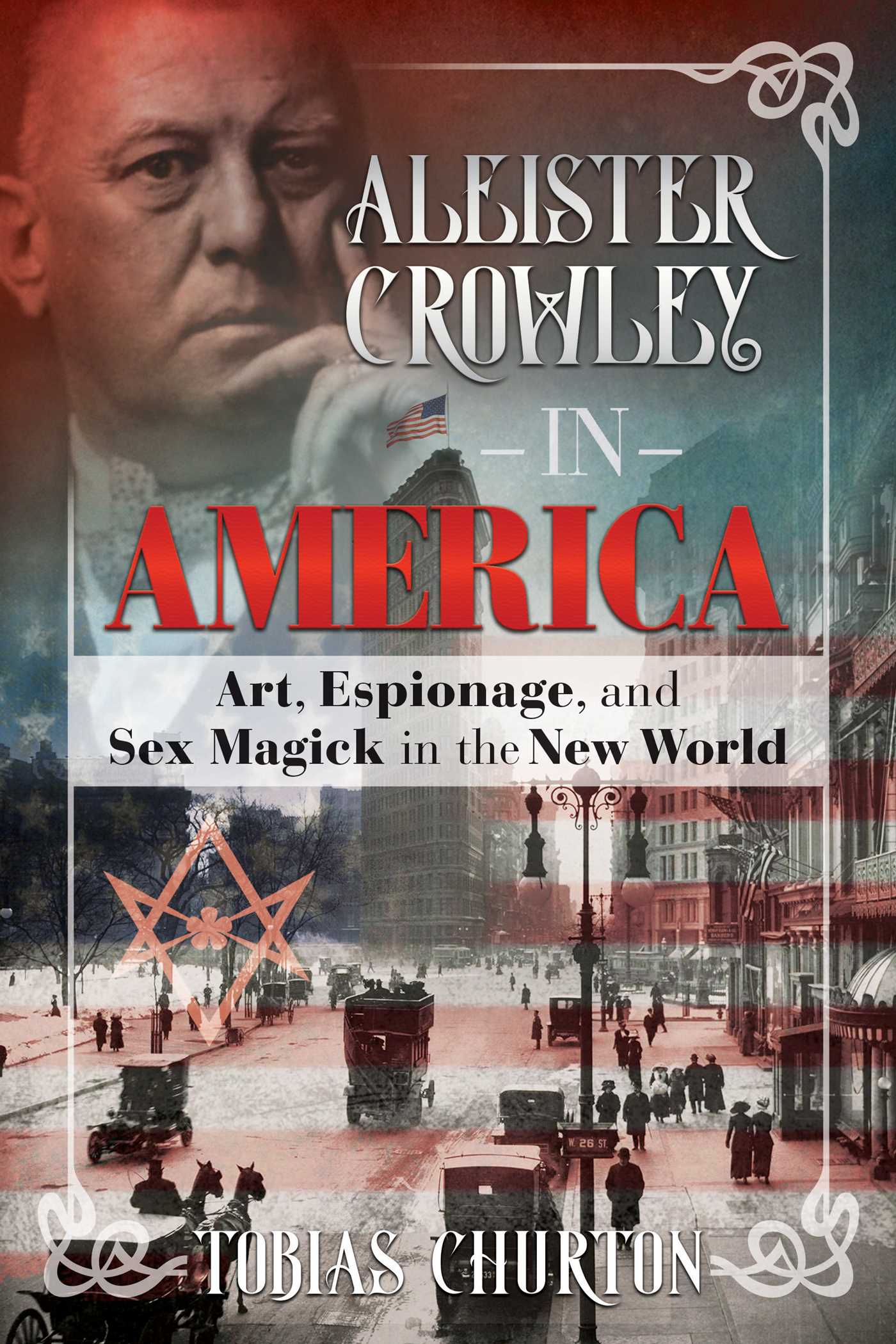 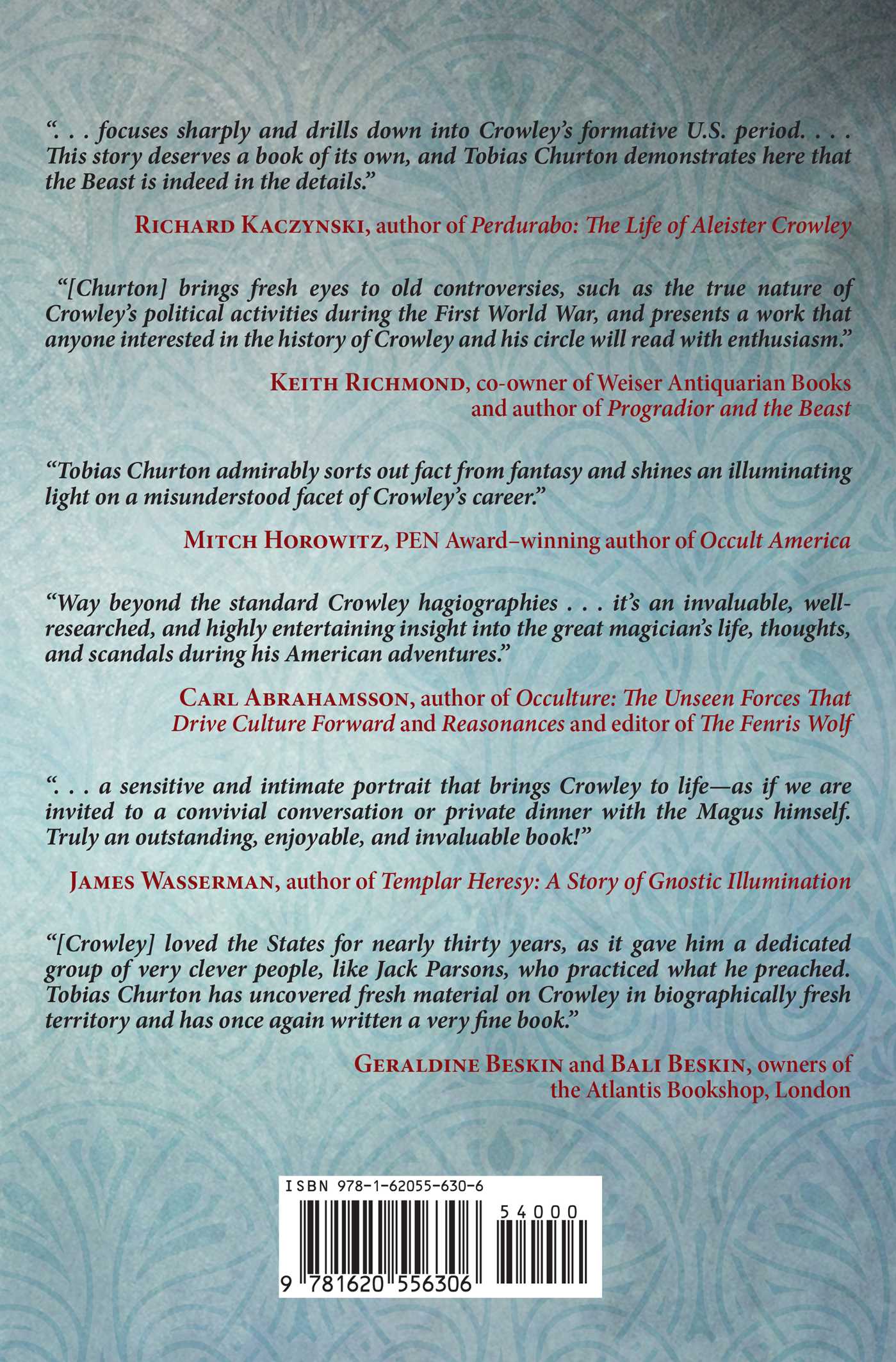 Art, Espionage, and Sex Magick in the New World

An exploration of Crowley’s relationship with the United States

In 1914 Crowley returned to the U.S. and stayed for five years: turbulent years that changed him, the world, and the face of occultism forever. Diving deeply into Crowley’s 5-year stay, we meet artists, writers, spies, and government agents as we uncover Crowley’s complex work for British and U.S. intelligence agencies. Exploring Crowley’s involvement with the birth of the Greenwich Village radical art scene, we discover his relations with writers Sinclair Lewis and Theodore Dreiser and artists John Butler Yeats, Leon Engers Kennedy, and Robert Winthrop Chanler. We experience his love affairs and share Crowley’s hard times in New Orleans and his return to health, magical dynamism, and the most colorful sex life in America. his role in the sinking of the passenger ship Lusitania, his making of the “Elixir of Life” in 1915, his psychedelic experimentation, and his run-in with Detroit Freemasonry. We also witness Crowley’s influence on Scientology founder L. Ron Hubbard. We learn why J. Edgar Hoover wouldn’t let Crowley back in the country and why the FBI raided Crowley’s organization in LA.

Offering a 20th-century history of the occult movement in the United States, Churton shows how Crowley’s U.S. visits laid the groundwork for the establishment of his syncretic “religion” of Thelema and the now flourishing OTO, as well as how Crowley’s final wish was to have his ashes scattered in the Hamptons.
CHAPTER EIGHTEEN

At 4:15 p.m. on the afternoon of his fortieth birthday, Crowley fell asleep in the passenger car taking him northwest of Chicago to the Minnesota capital St. Paul, on the Mississippi’s east bank. He dreamt of Hilarion, his very own obsession. Awaking, he felt impelled suddenly to tear off the seal from the Magick Ring made for the Grade of “Master of the Temple” 8º = 3▫ whose motto was “By the Force of Truth I have conquered the Universe.” He then noted boldly in Greek letters εγω ΛΟΓΟΣ ΑΙΩΝΟΣ 9º = 2▫ A...A... —“I am the Word of the Aeon.” He was the Magus, and his “Word” was Thelema. He was now to identify himself wholly with that Word. He took as the Omen of the moment a line from his A...A... Order collection ΘΕΛΗΜΑ (“Thelema”): “Therefore is the seal unloosed, that guarded the Eighth Abyss; therefore is the vast sea as a veil; therefore is there a rendering asunder of all things.”

One wonders what the Roman Catholic Bishop of the grandly imposing, domed St. Paul’s Cathedral of St. Paul would have thought about that. Crowley could hardly have avoided noting its almost anachronistic dominance of the otherwise thoroughly commercialized capital.

It is likely Crowley stayed at the stately thirteen-story Hotel St. Paul on West 5th Street. When he got there he realized he had lost the lapis lazuli, engraved with the V.V.V.V.V. motto and “Eye” from his platinum-lidded seal ring, itself studded with pyramids to represent the City where dwelt the Master of the Temple. Next morning at 10 a.m., Crowley returned to makeshift facilities inside a crowded warehouse on East 4th Street that served as a temporary station for the 200 daily trains. The once impressive, now blackened and part-demolished old Union Depot of 1881 had burned down two years previously. Close to the rubble of the old, Crowley found the lapis lazuli on the platform in seven pieces. The figure seven he found spiritually significant. He put the pieces in a packet into his traveling safe intended for distribution to seven representatives after his death. A year later, he checked for them; they were gone. Crowley associated such unaccountable losses with a kind of payment to, or sign from, inscrutable lords of destiny.

With thoughts of that nature occupying his mind, it is little wonder he found St. Paul and Minneapolis “merely magnified markets always open” with “no life of any kind outside business.” He imagined the populous as “poor damned souls” sweating to find a way out “somehow, somewhere.”14 He could barely understand how people could live such closed lives when all about them the elemental grandeur of nature cried out for celebration and spiritual participation. People’s religion went on with interminable proscriptions and moralizing inside European-style buildings, unrelated to the divine creation about them. The cities were colonies, alien and imposed on an environment, which had sent its denizens into themselves, concentrated only on business at hand.

What business had Crowley at hand? He maintained to Viereck that his investigation of “hyphenated-Americans” and non-hyphenated Americans revealed to him that the Midwest had no interest in the war, and could not see it had anything to do with them (oblivious to their economic relationship to the coasts), while German-Americans, he lied, were ready for insurrection and civil war at the right signal. In fact he found non-German-Americans generally against the German cause, but unwilling to consider doing anything about it, while German-Americans were generally not roused to assisting their old homeland’s struggle with the world. It should all be left to Europeans to sort out on their own territories.

In himself, Crowley longed to get through the Rockies where “there was a semblance of resurrection,” for being in touch with the Pacific archipelago and Asia, the West Coast had “caught a little of their culture.”15

Between Wednesday, October 13th, and Saturday, October 16th, Crowley covered the 2,000 or so miles of railroad between St. Paul and Vancouver in British Columbia, rumbling on west through what he considered a cultural vacuum in North Dakota and Montana toward Washington State and the Canadian border.

The ostensible reason for Crowley’s arrival in the neat, spacious, colonial-style coastal city of Vancouver was to inspect new recruits to the city’s OTO lodge, led by his North American viceroy Charles Stansfeld Jones, assisted by fellow Englishman Wilfred T. Smith.16 News of Crowley’s coming had stimulated palpable anticipation among the fifteen or so members. They were to greet their Very Illustrious Brother, Sovereign Grand Inspector VIIº under the assumed name of “Clifford” as he was involved in “a matter touching the welfare of the Empire.”17

It may be that Jeanne Foster did not meet up with Crowley until the 19th, for she does not appear to have been present when Crowley’s train came in at the still-under-construction (and now sadly demolished) Great Northern Vancouver Station at 9:25 a.m. V.I. Bro “Clifford” in a gray overcoat with Malacca cane (was he still suffering from the previous year’s phlebitis?) greeted Jones at the station, then, wasting no time, spent all day with Jones, talking OTO and A...A... business nonstop at Crowley’s billet, the massive chateau-like, eighteen-story high Hotel Vancouver on Howe Street. Now gone forever, we may imagine in another time, Crowley in his suite there, testing Jones on astral projection.

The following Tuesday, Very Excellent Soror Hilarion and Very Illustrious Bro Clifford were expected to inspect the Lodge. Before doing so, they met up in the profoundest sense in the Hotel Vancouver at 5:30 p.m. for an Object Crowley noted as “Thanksgiving for my sister and bride, Hilarion.” No other Scarlet Woman would ever again extract this much thanksgiving from Crowley’s amorous heart.
Tobias Churton

Tobias Churton is Britain’s leading scholar of Western Esotericism, a world authority on Gnosticism, Hermeticism, and Rosicrucianism. He is a filmmaker and the founding editor of the magazine Freemasonry Today. An Honorary Fellow of Exeter University, where he is faculty lecturer in Rosicrucianism and Freemasonry, he holds a master’s degree in Theology from Brasenose College, Oxford, and created the award-winning documentary series and accompanying book The Gnostics, as well as several other films on Christian doctrine, mysticism, and magical folklore. The author of many books, including Gnostic Philosophy, The Invisible History of the Rosicrucians, and Aleister Crowley: The Beast in Berlin, he lives in England.

“Aleister Crowley in America focuses sharply and drills down into Crowley’s formative U.S. period, burgeoning with rich and surprising depth beyond what is possible in a life-spanning biography. This story deserves a book of its own, and Tobias Churton demonstrates here that the Beast is indeed in the details.”

– Richard Kaczynski, author of Perdurabo: The Life of Aleister Crowley

“Churton has sifted through a mass of material--from long-neglected documents to the latest researches of contemporary Crowley scholars--to put together this comprehensive and intriguing study of the years the Beast spent in America. He brings fresh eyes to old controversies, such as the true nature of Crowley’s political activities during the First World War, and presents a work that anyone interested in the history of Crowley and his circle will read with enthusiasm.”

– Keith Richmond, co-owner of Weiser Antiquarian Books and author of Progradior and the Beast

“This beautifully produced and richly documented history tracks and clarifies Crowley’s myriad experiences in America. Tobias Churton admirably sorts out fact from fantasy and shines an illuminating light on a misunderstood facet of Crowley’s career.”

“Way beyond the standard Crowley hagiographies, Churton’s books always put the Great Beast in cultural context. This fascinating mustread is no exception; it’s an invaluable, well-researched, and highly entertaining insight into the great magician’s life, thoughts, and scandals during his American adventures.”

“Magician Tobias Churton has successfully cast a spell, transforming his 750-page comprehensive scholarly tome into a gripping and obsessive page turner, leaving one wishing for more. Replete with new and exciting details and interpretations of Crowley’s time in the New World--and of the multiple denizens of his exciting and unique social circles--the book includes previously unpublished manuscripts, letters, and photographs. Churton furnishes the reader with a sensitive and intimate portrait that brings Crowley to life--as if we are invited to a convivial conversation or private dinner with the Magus himself. Truly an outstanding, enjoyable, and invaluable book!”

“Crowley had a great hunger for almost everything he ever thought of or saw. He was economical with the truth, with his own money, and with his loyalties, but--and it is a big but--the scope and scale of America thrilled him. The vitality of the big cities, the newness and esoteric searching of the West Coast made him delirious with a big, greedy joy. He loved the States for nearly thirty years, as it gave him a dedicated group of very clever people, like Jack Parsons, who practiced what he preached. Tobias Churton has uncovered fresh material on Crowley in biographically fresh territory and has once again written a very fine book.”

Art, Espionage, and Sex Magick in the New World