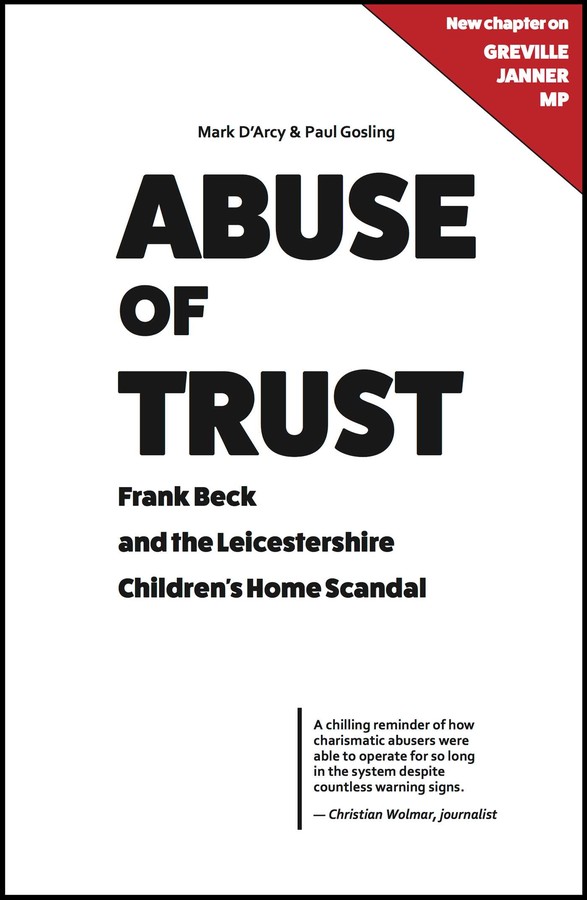 'Few books have managed to get to the heart of a story of abuse as thoroughly and accurately as Abuse of Trust.' — CHRISTIAN WOLMAR, JOURNALIST AND AUTHOR

For the first time in 18 years, the definitive account of one of Britain's worst child abuse scandals is re-published — with a new chapter looking at the role of the Labour MP Greville Janner.

Frank Beck sexually and physically abused more than 200 children while working as a residential care home manager for Leicestershire County Council. This book shows how he got away with it, after gulling social workers and council managers. Hundreds of children in the care of the local authority were damaged, and some tragically died. One is suspected, now, of being murdered.

Janner, a lawyer, backbencher and influential figure in Labour, repeatedly avoided prosecution for his involvement in the Leicestershire care scandal, despite being named as an abuser during the criminal case against Beck.

In an epilogue to this new, enlarged edition of this acclaimed book on the scandal, Paul Gosling deals with Janner's dominance of the local Labour Party, his influence within the wider parliamentary party and the failed police investigations into him. Abuse of Trust, first published in 1998, has long been viewed by social work professionals as an important audit of this case. Gosling and the BBC journalist Mark D'Arcy, his co-author, investigate how Beck and his cronies came to rampage through children's homes in Leicestershire for more than a decade.

'Few books have managed to get to the heart of a story of abuse as thoroughly and accurately as Abuse of Trust...

Its message is a chilling reminder of how charismatic abusers like Beck and, indeed, Savile, were able to operate so effectively and for so long in the system despite countless warning signs.

The question this begs: could this happen today?'

'Today when the pendulum seems to swinging again to start disbelieving claims by survivors  that they were sexually abused the republication of a book examining one of the first major child sex scandals is a timely reminder of what victims faced in the 1970s and 1980s.

Abuse of Trust looks at the case of the long dead Frank Beck, a charismatic social worker who got away with abusing possibly up to 200 children for two decades before finally being caught and convicted.

It is particularly relevant as Alexis Jay’s child sex abuse inquiry is planning to resurrect the dire situation in Leicestershire social services at the time with an examination of the role of the then local MP, Greville Janner, who was facing multiple charges of child sexual abuse at the time of his death last year.

The book written by two diligent journalists, Mark D’Arcy, a BBC Parliament correspondent and Paul Gosling, an ex Leicester councillor and an experienced freelance journalist, and has been updated by Paul with the latest information about the allegations and investigation into Greville Janner.

The involvement of Greville Janner – who always claimed he was falsely accused by the paedophile Frank Beck  of sexually abusing boys – will be highly  controversial as his family, led by his son, Daniel Janner,QC intend to try and stop the hearing going ahead. They want instead go to the civil courts so all the allegations from 33 survivors against him can be subject to rigorous cross examination … I would recommend this book to anyone who wants to remind themselves about sheer nastiness, brutality and cover ups that seem to dog this area.'

'An important and in-depth analysis of one case among the many... involving members of the 'establishment', where child victims of sexual crime, adult survivors and those professionals supporting them have been silenced and denied justice.'