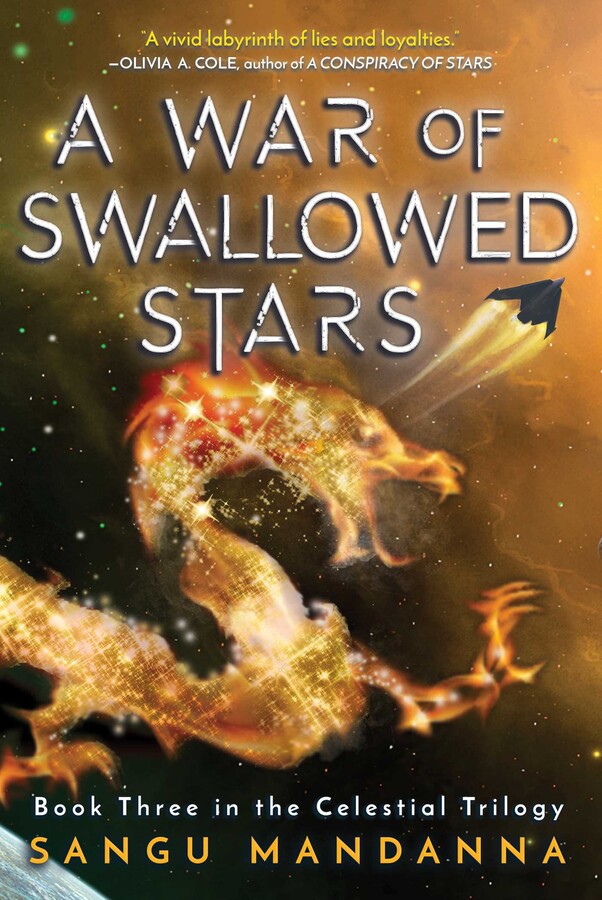 A War of Swallowed Stars

“A rare gem of a sequel . . . Each page drips with action and moral complexities.” —Natasha Ngan, New York Times bestselling author of Girls of Paper and Fire, on A House of Rage & Sorrow

A prince without his kingdom.

A kingdom without its princess.

The destruction of the stars themselves.

War is destroying the galaxy. Esmae has vanished without a trace. A terrifying, ravenous beast is devouring the stars one by one. Titania is offered a gift that may well be a curse. Alexi, the exiled prince, is asked to pay a heavy price for his mistakes. And far, far away, on a dark, mysterious planet, a sleeping god stirs awake.

As the end of the world draws ever closer, Esmae and Alexi must decide how far they’ll go to win—and who they’ll sacrifice along the way.

Celebrated author Sangu Mandanna promises a gripping conclusion to the Celestial Trilogy in A War of Swallowed Stars.

Sangu Mandanna was four years old when an elephant chased her down a forest road and she decided to write her first story about it. Seventeen years and many, many manuscripts later, she signed her first book deal. She is the author of The Lost Girl, A Spark of White Fire and its sequels, and has contributed to several anthologies. She lives in Norwich, in the east of England, with her husband and kids.

"Seventeen-year-old warrior Esmae Rey is tired of fighting. She and her twin brother, Alexi, have been battling for the crown of the planet Kali, a kingdom that should be Esmae’s birthright. Esmae remains devastated that her mother, Kyra, not only sides with Alexi, but has been bent on killing Esmae to protect Alexi and their younger brother, Bear, from a curse prophesying that only two of Kyra’s three children would live. But when, after escaping another one of her mother’s deadly traps, Esmae is asked to kill Sorsha, a great beast who is endangering the universe, she wonders if her mission for revenge against her treacherous family is worth a potentially world-ending war. But even if she has a change of heart, can Esmae broker peace before she and everyone she loves lose what they truly value? This final volume in a gripping trilogy about the battle to claim Kali is, in some ways, lighter and more humorous than its predecessors, resting as it does on the firm foundations of relationships the author has skillfully built over the course of many pages. While the plot is action packed and the dialogue is witty and, at times, hilarious, the book’s biggest strength lies in the author’s profound knowledge of human nature and the slow, rewarding revelation of each character’s psychological development. A thrilling space opera and a fitting ending to an impressive trilogy. (list of characters) (Science fiction. 14-18)" —Kirkus Reviews

Praise for A House of Rage & Sorrow

[*] “The high-stakes, lofty narrative reads like a mythology story of its own, as the lives of gods, mortals, and spaceships are intricately connected, setting up for what’s sure to be a breathtaking conclusion.” —Booklist, Starred Review


“A rare gem of a sequel that manages to be even better than the first book! Each page drips with action and moral complexities, and plot twists that will both make and break your heart. Perfect for readers looking for sharp, smart, fast-paced fantasies, especially with fierce female leads.” —Natasha Ngan, New York Times bestselling author of Girls of Paper and Fire

"A thrilling sequel to Mandanna's incredible A Spark of White Fire.A House of Rage and Sorrow takes a gorgeously rendered world of spaceship kingdoms, meddling gods, and galaxy-shaking prophecies and pairs it perfectly with an achingly intimate family drama. I cannot wait for the conclusion!" —S. A. Chakraborty, author of The City of Brass and The Kingdom of Copper

Praise for A Spark of White Fire

Named to LITA's Hal Clement List of Notable YA, 2019

[*] “Sangu Mandanna seamlessly weaves science fiction elements with Indian mythology, creating a world that feels truly alive. Mandanna's characters are fully fleshed, especially the engaging and sympathetic Esmae. A Spark of White Fire is the first in a trilogy, and readers will be eager for the next installment.” —Shelf Awareness, starred review

“In this seamless fusion of fantasy and sci-fi, Sangu Mandanna combines a dazzling world with gripping, high-stakes family drama. An epic opening chapter.” —Samantha Shannon, New York Times bestselling author of The Priory of the Orange Tree and The Bone Season

"Sangu Mandanna's A Spark of White Fire is full of brilliant, complex characters against a compelling mythological canvas. It's full of love and gods, reversals and surprises. I loved it and can't wait for the next book." —Kat Howard, Alex Award-winning author of An Unkindness of Magicians

"A vivid labyrinth of lies and loyalties. Mandanna has built a dazzling world—you'll see stardust every time you close your eyes." —Olivia A. Cole, author of A Conspiracy of Stars

“A gorgeous marriage of science fiction and fantasy. Meddling gods, princesses in exile, and cities aboard spaceships. This is nothing like you’ve ever read before.” —Justina Ireland, New York Times bestselling author of Dread Nation

"If you’re looking for a spectacular and immersive read that you’ll want to finish in one sitting, A Spark of White Fire should absolutely be on your list. It's an incredible story, and it will be a difficult wait for its sequel." —SyFy Wire “This is a fast-paced, engaging tale sure to keep readers hooked with its twists and turns while they wholeheartedly cheer for Esmae . . . An incisive story nuanced by dilemmas about love, belonging, and conflicting loyalties.” —Kirkus Reviews

A War of Swallowed Stars