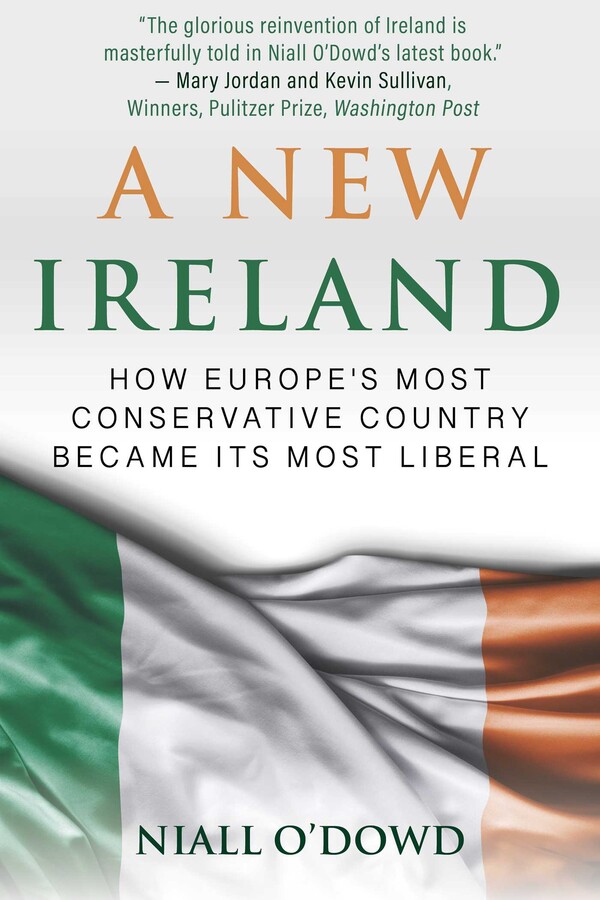 How Europe's Most Conservative Country Became Its Most Liberal

By Niall O'Dowd
LIST PRICE £18.99
PRICE MAY VARY BY RETAILER

It’s not your father’s Ireland. Not anymore. A story of modern revolution in Ireland told by the founder of IrishCentral, Irish America magazine, and the Irish Voice newspaper.

In a May 2019 countrywide referendum, Ireland voted overwhelmingly to make abortion legal; three years earlier, it had done the same with same-sex marriage, becoming the only country in the world to pass such a law by universal suffrage. Pope Francis’s visit to the country saw protests and a fraction of the emphatic welcome that Pope John Paul’s had seen forty years earlier. There have been two female heads of state since 1990, the first two in Ireland’s history. Prime Minister Leo Varadkar, an openly gay man of Indian heritage, declared that “a quiet revolution had taken place.”

It had. For nearly all of its modern history, Ireland was Europe’s most conservative country. The Catholic Church was its most powerful institution and held power over all facets of Irish life.

But as scandal eroded the Church’s hold on Irish life, a new Ireland has flourished. War in the North has ended. EU membership and an influx of American multinational corporations have helped Ireland weather economic depression and transform into Europe’s headquarters for Apple, Facebook, and Google.

With help from prominent Irish and Irish American voices like historian and bestselling author Tim Pat Coogan and the New York Times’s Maureen Dowd, A New Ireland tells the story of a modern revolution against all odds.

DECLAN Flynn was a 30-year-old, Dublin Airport employee who was attacked and murdered by a gang of youths, all in their teens, with one as young as 14, on the night of Sept 9, 1982.

Fairview Park, in Dublin, was a common meeting place for gay men like Flynn who lived nearby, and the park had been targeted by youth gangs from Dublin’s tough Northside. There had been several beating incidents in the summer of 1982, but as the season changed to autumn, police showed little interest in pursuing the perpetrators.

Flynn had helped with a resource center for gay Irish in the city center in what is now Temple Bar, but he was not widely known in the gay community. Flynn’s family did not know his sexual orientation and his father protested his son was not gay even after he was killed.

Earlier that night Flynn had gone to a local pub and then walked home through Fairview Park. He was never seen alive again.

At 1:48am the following morning, the local fire brigade was called to Fairview Park where they found Flynn lying dead.

Cops originally declared he was the victim of a robbery as he had no wallet or ID on him. The truth was a lot worse.

On Sunday, September 12, 1982, cops arrested five teens and charged them with Flynn’s murder. The 14-year-old boy was first to be tried.

He told how he was cycling through the park and came across the gang waiting to beat up a gay man.

One of the gang told him “Hide behind a tree; we are going to bash a queer.”

Another member served as the set-up man, sitting on his own on a park bench with a “come on” look as Flynn walked by.

As Flynn sat down on the bench, the gang appeared from behind the trees. Flynn ran for his life but was tripped up. They beat him mercilessly with sticks. Flynn died from asphyxia, choking on his own blood.

As reported in the Irish Times, at the trial, two of the defendants stated, “We were part of the team to get rid of queers from Fairview Park. A few of us had been queer-bashing for about six weeks before and battered about 20 steamers. We used to grab them. If they hit back, we gave it to them.”

Incredibly, despite the damning evidence, all five walked free after Justice Sean Gannon essentially gave them suspended sentences and did not order them jailed.

In suspending the sentences of all involved, Justice Gannon said, “One thing that has come to my mind is that there is no element of correction that is required. All of you come from good homes and experienced care and affection.

“Unfortunately, it has transpired from the evidence that this was not an isolated incident, but hopefully it will be the last. Everybody is entitled to have feelings and opinions but it should never reach the stage of expressing violence to others.

“While I must demonstrate the abhorrence of the community by imposing sentences, I don’t think it necessary to be served immediately by detention,” said Gannon, who died in 2011.

All hell broke loose after the verdict.

Flynn’s father said, “I had expected that justice would be done and be seen to be done.”

The Irish Times reported one woman saying there was audible cheering in the area where the defendants lived.

There was a different political reaction with demands for an immediate inquiry and the judge to be removed. The sentence was widely compared with a 12-month sentence passed on a man who had stolen a woman’s purse with 20 Irish pounds in it.

Gay activist David Norris said, “It could be interpreted as a license to kill.”

The killing created a massive shock and fear among the LGBTQ community. They understood for the first time ever they had to take their cause to the streets. On Saturday, Mar 19, 1983, about 400 men, women, and children marched in the biggest protest ever against street violence against gays. Suddenly they were risen people.

In 2018, 38 years later,  Ireland’s gay Taoiseach Leo Varadkar hosted a reception for Flynn’s family in honor of his memory.

His nephew Niall Behan stated to The Irish Times, “This was the first time we could lay it out, not just the horrific nature of the crime and the abhorrent sentences but who Declan was.

“You only ever read about the last part of his life, but we wanted people to know about the life he had. It brings it back to the reality that this was a person and counteracts what the judge said, that lack of value he placed on Declan. We wanted to bring back his life, that he was a person, full of life and laughter.”

By his death, Declan Flynn transformed the gay community in Ireland who realized they had to organize in order to be protected.

After marriage equality was passed, in May 2015, many laid flowers at Declan Flynn’s memorial.

His horrific death had not been in vain. Ireland had changed utterly.
Niall O'Dowd

Niall O’Dowd is the founder of IrishCentral, Irish America Magazine, and the Irish Voice newspaper. He is also responsible for publishing IrishCentral.com and the Irish Emigrant newspaper in Boston. Niall was awarded an honorary doctorate by University College Dublin for his work on the Irish peace process, which was a subject of a book, Daring Diplomacy, and a PBS Special, An Irish Voice. He has written for the New York Times, the Guardian, Huffington Post, and the Irish Times. He lives in New York City.

"As the far-right takes hold across Europe and the world, Ireland—once a bastion of conservative Catholicism—has seen a liberal revolution. Niall O'Dowd, a journalist who has chronicled every major shift in Irish identity, tells the extraordinary story of how Ireland reinvented itself into a beacon of liberalism. In showing the historical roots and modern day efforts that led to this massive change, O'Dowd delivers a compulsively readable book that transcends Ireland's borders. A must read."
— Amy Chozick, writer-at-large for the New York Times and bestselling author of Chasing Hillary

"No country has changed more in the last fifty years than the Republic of Ireland. It has gone from a conservative, priest-ridden country to one of the most dynamic democracies in the world.  A New Ireland is not only a complete history of Ireland, but a compelling and suspenseful behind-the-scenes chronicle of how it all came about. A marvelous and compelling read."
—Dermot McEvoy, author of The 13th Apostle: A Novel of Michael Collins and the Irish Uprising

"The glorious reinvention of Ireland is masterfully told in Niall O'Dowd's latest book. A New Ireland explains just how fast social change has come to the country. It's an insightful look at Ireland's hunger for fairness and rapid cultural transformation by a keen observer. O'Dowd has lived Irish history and knows its problems as well as its poetry."
— Mary Jordan and Kevin Sullivan, Winners, Pulitzer Prize, Washington Post

“I am sprinting through this marvelous new book by Niall O'Dowd about how Europe's most conservative country became its most liberal―how people overthrew a crusted theocracy. First nation to legalize marriage equality by a vote of the entire country. A New Ireland."
— Jim Dwyer, author and Pulitzer Prize-winning columnist, New York Times

How Europe's Most Conservative Country Became Its Most Liberal

By Niall O'Dowd
LIST PRICE £18.99
PRICE MAY VARY BY RETAILER