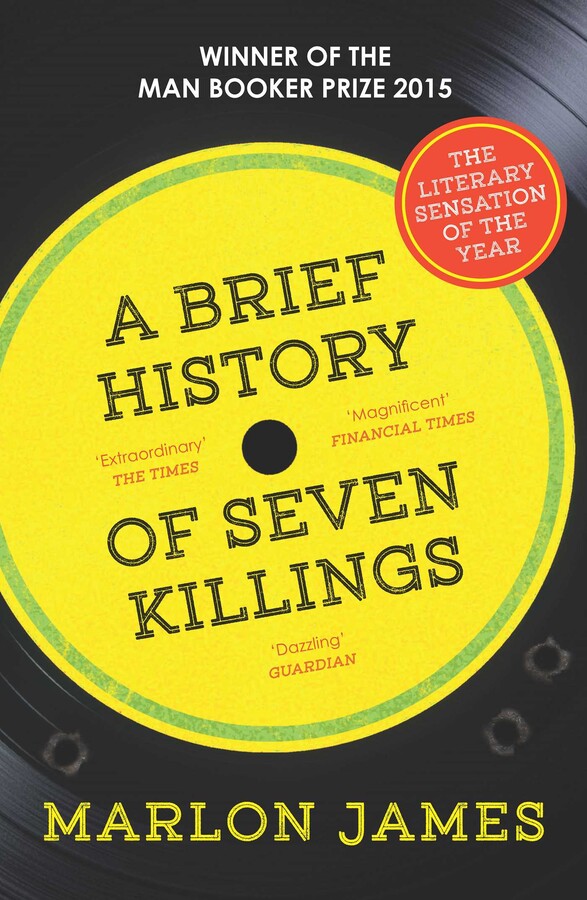 A Brief History of Seven Killings

WINNER OF THE MAN BOOKER PRIZE 2015

From the acclaimed author of The Book of Night Women comes a dazzling display of masterful storytelling exploring this near-mythic event. Spanning three decades and crossing continents, A Brief History of Seven Killings chronicles the lives of a host of unforgettable characters – slum kids, one-night stands, drug lords, girlfriends, gunmen, journalists, and even the CIA. Gripping and inventive, ambitious and mesmerising, A Brief History of Seven Killings is one of the most remarkable and extraordinary novels of the twenty-first century.

Marlon James was born in Jamaica. He is the author of John Crow’s Devil (Oneworld, 2015), a finalist for the Los Angeles Times Book Prize and the Commonwealth Writers Prize, and The Book of Night Women (Oneworld, 2009), which won the 2010 Dayton Literary Peace Prize, the Minnesota Book Award and was a finalist for the 2010 National Book Critics Circle Award in fiction. His third novel, A Brief History of Seven Killings (Oneworld 2014), won the Man Booker Prize in 2015, the American Book Award, and the Anisfield-Wolf Fiction Prize, and was a finalist for the International Dublin Literary Award and the National Book Critics Circle Award. His short fiction and non-fiction has appeared in Esquire and Granta. He is currently the Writer-in-Residence and Associate Professor of English at Macalester College, Minnesota, USA.

‘A nightmare symphony of crime that begins in 1970s Jamaica and never really leaves, even as the semi-historical plot leaves a surreal blood trail from a Bob Marley assassination attempt to crack-addled New York City. James’ intoxicating prose is relentless, feverishly up-close inside his characters’ rattled nerves even as the narrative scope widens into an evocative portrait of the author’s native Kingston’

'Vast and vastly ambitious... much to admire... fascinating... the author's imaginative and stylistic range are impressive'

'If the scope of James’s talent has grown from book to book, his imagination is more consistent – that tendency to inhabit the dark and gory places, and to shine a light on them… When reading reviews of Night Women, James apparently became bored with comparisons to Toni Morrison; and with A Brief History, he’s got bored with comparisons to Quentin Tarantino. But it is hard not to see the strength of that comparison. This is a novel that explores the aesthetics of cacophony and also the aesthetics of violence'

'It’s like a Tarantino remake of “The Harder They Come” but with a soundtrack by Bob Marley and a script by Oliver Stone and William Faulkner, with maybe a little creative boost from some primo ganja. It’s epic in every sense of that word: sweeping, mythic, over-the-top, colossal and dizzyingly complex. It’s also raw, dense, violent, scalding, darkly comic, exhilarating and exhausting — a testament to Mr. James’s vaulting ambition and prodigious talent.'

‘[A Brief History of Seven Killings] is not only persuasive, but tragic, though in its polyphony and scope it’s more than that ... the book’s increasing sense of absurdity, its pop culture references, its compulsive ventriloquism and its range of tones – comic, surreal, nightmarish, parodic – began to remind me uncannily of David Foster Wallace’s all-or-nothing Infinite Jest.’

'Magnificent ... richly imagined... James has triumphed in capturing the tension, the politics, the heat, chaos, beauty and music of Jamaica'

‘This seething, hot, violent, action-packed novel is enormous in every sense…the ambition is huge, but [James] pulls it off with huge style, confidence, imagination and wit... Extraordinary’

‘Epic, immersive, acutely observed and deeply moving, it’s worth every long hour it demands of the reader ... James’ meticulous characterization makes his writing exceptionally vivid and compelling ... James’ long, sprawling, masterfully woven together novel finds its redemption in the indomitability of the human will to live, and its light in a sly, sardonic humor that finds its way in amongst the horrific violence and grinding, Sisyphean cycle of misery. Though it by no means makes for a brief read, or an easy one, it’s a brilliant, heartbreaking and searing one that will burrow its way deep into the reader’s soul.’

‘An impressive feat of storytelling: raw, uncompromising, panoramic yet meticulously detailed. The Jamaica portrayed here is one many people have heard songs about but have never seen rendered in such arresting specificity – and if they have, only briefly.’

‘James has written a dangerous book, one full of lore and whispers and history ... a great book ... James nibbles at theories of who did what and why, and scripts Marley’s quest for revenge with the pace of a thriller. His achievement, however, goes far beyond opening up this terrible moment in the life of a great musician. He gives us the streets, the people, especially the desperate, the Jamaicans whom Marley exhorted to: “Open your eyes and look within:/ Are you satisfied with the life your living?”’

‘A gripping tale in which music, drugs, sex, and violence collide with explosive results.’

‘Brilliantly executed ... The novel makes no compromises, but is cruelly and consummately a work of art.’

‘An exuberant, Balzacian novel by self-described ‘post-post colonialist’ writer who is at ease with several canons, traditions, and dialects. You’ll also find a political novel on the level of Don DeLillo. It’s the rare ‘revelation’ that will easily outlive its hype-cycle.’

'A nightmare symphony of crime that begins in 1970s Jamaica and never really leaves, even as the semi-historical plot leaves a surreal blood trail from a Bob Marley assassination attempt to crack-addled New York City. James’ intoxicating prose is relentless, feverishly up-close inside his characters’ rattled nerves even as the narrative scope widens into an evocative portrait of the author’s native Kingston.'

‘Thrilling, ambitious ... Both intense and epic.’

‘Nothing short of awe-inspiring.’

‘A prismatic story of gang violence and Cold War politics in a turbulent post-independence Jamaica.’

‘Exploding with violence and seething with arousal, the third novel by Marlon James cuts a swath across recent Jamaican history ... This compelling, not-so-brief history brings off a social portrait worthy of Diego Rivera, antic and engagé, a fascinating tangle of the naked and the dead.’

‘Marlon James's writing can be at once at once punchy and lyrical; can alternate strange, dreamy poetry with visceral action; and can bring persuasive life to a kaleidoscopic range of characters. His gifts are expansive… this is a book the energy, intelligence and intellectual range of which demands and rewards attention. It asks questions that remain pertinent, and demands empathy for characters whom official histories might prefer to overlook. Moreover, it showcases the extraordinary capabilities of a writer whose importance can scarcely be questioned’

‘It may sound daunting, but the way James uses language is amazing ... Vigorous, intricate and captivating, A Brief History of Seven Killings is hard to put down. Book clubs come running.’

'Marlon James has done a hard thing. He's taken a complex, myth-like chapter in the story of an international legend, and given it new life... Poetic, vivid, this is a deeply entertaining read'

‘Should be a contender for next year’s [Booker] long list. A Brief History of Seven Killing by Marlon James, reimagines the 1976 attempted assassination of Bob Marley by creating a dazzling fictional representation of Jamaica'

'[A] magisterial, viscerally lyric epic ... The sharp-edged pleasures of this book come from its protean, potent language. Each of James’s characters speaks in a distinct (though sometimes shifting) voice and dialect ... [like] reading a pulp fiction version of Faulkner’s The Sound and the Fury.’

'A vivid plunge into a crazed, violent and corrupt world, told through multiple narrators and executed with swaggering aplomb... the most original novel I’ve read in years.'

‘This novel cracks open a world that needs to be known. It's scary and lyrically beautiful - you'll want to read whole pages aloud to strangers.’

'A Brief History of Seven Killings is a masterpiece. Hinged around the 1976 assassination attempt on Bob Marley in Kingston, this massive poetic novel is a gripping, riveting read. Intuitively original, deeply erudite and intelligent, told from multiple points-of-view, it unravels the lethal world of mid-1970s Jamaican politics and its decades-long consequences in the deadly Yardie world of crack-dealing. Magnificent.'

'A brilliant novel, highly recommended; one of those big, rich, magisterial works that lets us into a world we really don’t know.

'This novel should be required reading.'

'James is masterful at inhabiting a variety of voices and dialects, and he writes unflinchingly about the violence, drug-fueled and coldblooded, that runs through [Jamaica’s] ghettos…James’ fiction thus far is forming a remarkable portrait of Jamaica in the 19th and 20th centuries.'

A Brief History of Seven Killings

WINNER OF THE MAN BOOKER PRIZE 2015