Andrea has dedicated her life to sharing her passion for living a naturally and healthy lifestyle with the world, while helping to guide others through the confusing maze of twenty-first century supermarkets and fad diets. Andrea was already a successful retail product marketing manager before she took a leap of faith in 1998 and quit her job to pursue her passion. She enrolled in a holistic nutrition program and began to understand how food affected her body while learning about the benefits of a natural and organic diet.

The following year, she gathered all of her energy and together with Randy Boyer, the two launched their dream career by founding The Healthy Shopper Inc.—a coupon book for natural and organic products. Reaching more than 200,000 people a year, the Healthy Shopper, to this day, remains the only coupon book in Canada for natural and organic products.

Eight years later, lightning struck again and the pair launched www.NaturallySavvy.com, a sophisticated media company whose sole purpose is to educate the masses about living the lifestyle she truly loves. Since then, Andrea has established herself as a respected and authoritative voice in all corners of the health and wellness industry. She has appeared as a healthy living expert on news segments across North America which have aired on NBC, ABC, CBS, Fox, Univision, WGN, CTV, and CBC. Her voice has been heard on SiriusXM as a guest on Martha Stewart and Oprah Radio, and as a regular on “The Morning Jolt” with Larry Flick. Her words have appeared in a variety of magazines and newspapers such as Health, Shape, Newsday, Women’s Day, Men’s Fitness, the Chicago Tribune, Los Angeles Times, and online at The Huffington Post, the Examiner, Reader’s Digest, MariaShriver.com, Wellness.com, and The Food Network. Andrea is proud to be the kind of mom who feeds her kids fish oil, flaxseeds, and seaweed. 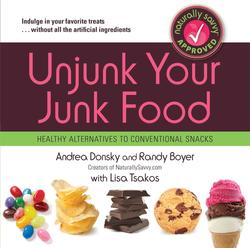